Tomorrow I will post my review of N.T. Wright’s chapter “Whence and Whither Historical Jesus Studies in the Life of the Church?” from Nicholas Perrin and Richard B. Hay’s (eds.) Jesus, Paul, and the People of God: A Theological Dialogue with N.T. Wright, but today I want to share something he says about the Chalcedonian Definition, wherein Jesus was stated to be fully human and fully divine over against the teaching of Nestorius, who was deemed a heretic and accused of splitting the divine from the human within Christ (though it seems many are not sure if this is actually what he taught or if it is merely how his opposition [e.g. Cyril of Alexandria] framed him).

“…the Chalcedonian Definition looks suspiciously like an attempt to say the right thing but in two dimensions (divinity and humanity as reimagined within a partly de-Judaized world of thought) rather than in three dimensions. What the Gospel offer is the personal story of Jesus himself, understood in terms of his simultaneously (1) embodying Israel’s God, coming to rule the world as he had always promised, and (2) summing up Israel itself, as its Messiah, offering to Israel’s God the obedience to which Israel’s whole canonical tradition had pointed but which nobody, up to this point, had been able to provide. The flattening out of Christian debates about Jesus into the language of divinity and humanity represents, I believe, a serious de-Judaizing of the Gospels, ignoring the fact that the Gospels know nothing of divinity in the abstract and plenty about the God of Israel coming to establish his kingdom on earth as in heaven, that they know nothing of humanity in the abstract, but plenty about Israel as God’s true people, and Jesus as summing that people up in himself. The Council of Chalcedon might be seen as the de-Israelitization of the canonical picture of YHWH and Israelinto the abstract categories of ‘divinity’ and ‘humanity.’ I continue to affirm Chalcedon in the same way that I will agree that a sphere is also a circle or a cube also a square, while noting that this truth is not the whole truth.” (p. 135) 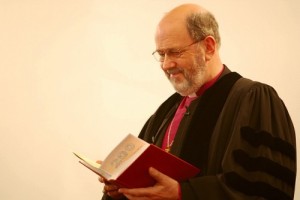 As I have talked with fellow evangelicals over the years it does seem that many find the Council of Chalcedon as being more political than doctrinal and few seem to think that anything substantial came from the decisions made there. Wright does not go that far, but he does seem to imply it only reached a half-truth and one could suggest that he doesn’t see the difference between the Christology of Cyril and that of Nestorius as being very relevant.

What are your thoughts? Do you think Wright undermines something very important that is found in the Chalcedonian Definition or do you fall to the side that sees the Council of Chalcedon as semi-irrelevant (or worse)?

10 thoughts on “N.T. Wright on the Chalcedonian Definition”