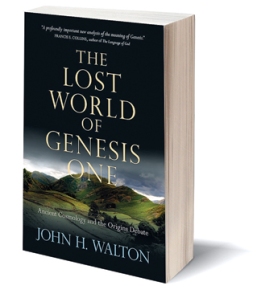 Thus far we have discussed the first six propositions on Genesis 1 set forth by John H. Walton (see proposition six here). The seventh proposition is this: “Divine rest is in a temple.” Walton argues that if Genesis 1 is an account of material origins then the seventh day is a “mystifying.” Why is God resting?

“Without hesitation the ancient read would conclude that this is a temple text and that day seven is the most important of the seven days.” This is not something most modern readers would conclude. Why would it have been easy for an ancient to see?

“Deity rest in a temple, and only in a temple. Thus is what temples were built for. We might even say that this is what a temple is–a place for divine rest.” (p. 71)

So he come to our first hint. Walton seems to be directing us toward the idea that creation is God’s temple and that language about creation is not about the material origins, but a metaphorical depiction of God establishing his throne on the cosmos.

Walton expounds upon his point: “…in the ancient world rest is what results when a crisis has been resolved or when stability has been achieved, when things have ‘settled down.’ Consequently normal routines can be established and enjoyed.” (p. 72)

So what we find here is not God creating material things from nothing only to cease this process, but God organizing and establishing his temple in order to settle into it as a Kingly Deity.

Walton discusses the wording of this chapter; other passages like Psalms 132.7-8, 13-14; and other ancient Near Eastern literature like the Temple Hymn of Kes and the Enuma Elish where the deity “rested” after the completion of his temple (pp. 72-75).

At the end of this chapter Walton asks two important questions that he hopes to answer in future chapters:

(1) “What are the implications of identifying Genesis 1 as a ‘temple text’?”

We will begin to turn to these questions next time.