Yesterday I shared some comments on Psalm 1 (see “Psalm 1: comments and grammar chart”). In that post I mentioned that it seemed like the Septuagint (LXX) rendering of 1.5a could have easily been interpreted by early Christian exegetes as a reference to resurrection. As passages like Luke 24.25-27 and John 5.39 state, many early Christians believed that Jesus had taught his disciples to read Scripture seeking to know more about him. If you read the Gospels or the Pauline Epistles you will have many opportunities to see this in action. So it in an interesting exercise to ask what passages might have influenced early Christian doctrine. I think Psalm 1.4b-5a if one of those passages.

This last statement adds emphasis to the judgment. I don’t know if Christians would have seen this as an annihilation of sorts. As I mentioned yesterday the following verse (v. 5a) reads, διὰ τοῦτο οὐκ ἀναστήσονται ἀσεβεῖς ἐν κρίσει. The wicked will not “rise up” in the judgment. This word ἀναστήσονται from ἀνίστημι was used by early Christians to depict Jesus’ resurrection. In conjunction 1.4b-5a could have easily been read to say that the wicked are destroyed, removed from the face of the earth, and at the judgment they will not experience “resurrection.”

J.K. Gayle shared some thoughts on this subject as well. See “Interpretive Spins in the Ψαλμοὶ: the first twists.” 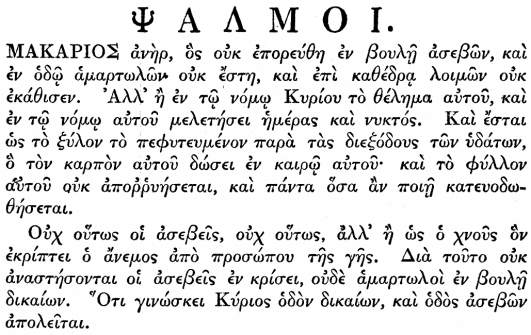 3 thoughts on “Annihilation and resurrection in Psalm 1 of the LXX.”