In my last post I summarized Collins’ writings on Adam and Eve in the Book of Genesis (see part 11). This post will follow Collins through a survey of how Adam and Eve are presented in the rest of the Hebrew Scriptures. 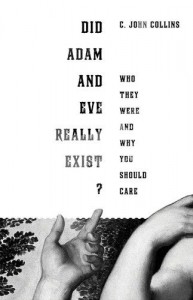 Collins doesn’t limit allusions to Adam and Eve to the use of the words “Adam” and “Eve.” Rather, he asks where the Hebrew Scriptures reflect the narrative of Genesis 1-5. He begins by noting that Genesis 1-11 and the whole Book of Genesis cannot be read without 1-5 (p. 66, 67). Creation/Sabbath is a prominent motif:

Eden as a temple/tabernacle reminds readers of the place of humanity before God, especially Adam as the archtype:

“Israel’s sanctuaries, the tabernacle and then the temple, were God’s down payment on the accomplishment of his plan; the Christian church furthers it, and the description of the final state of the world (Revelation 21–22) is the completion (p. 69).”

Finally, Collins suggests that passages like Hosea 6.7 and Job 31.33 may echo Genesis 1-5 and the story of Adam and Eve. What we must realize about Collins’ argument is that he assumes that echoes of Genesis 1-5 reflect the greater context of that story and this includes the important role of Adam and Eve. Sure, there are not many direct mentions of the “first couple,” but this story of Genesis 1-5, especially 1-3, establish how we understand other texts.