Douglas Estes was an adjunct professor at Western Seminary (San Jose, CA) when I met him. He taught my Koine Greek sequence. Also, he was the lead pastor at Berryessa Valley Church. I never saw him in his pastoral vocation, but I do sense that I was pastored by him. Estes was one of the most forthright professors when it came to discussing what it meant to move toward doing doctoral work. Also, he went above and beyond to make sure that I had the opportunity to learn. As a full-time seminary student with a full-time graveyard shift job that often came to class half-dead he proved to be quite the educator since I survived his classes. When I began my ThM he spent over an hour on the phone one day talking me through things I needed to consider. I know that this man is a first rate pastor-scholar and mentor.

Since I have been writing a series on “Educating the local church” (see Pt. I: introduction ; Pt. II: the concerns of pastors ; Pt. III: what do congregations need to know? ; Pt. IV: how do we do it? ; Pt. V: introducing critical scholarship) I thought it might be wise to interview a few pastors. I wanted to know how pastors approach the task of educating the church. Estes is one of several who agreed. One of the things that led me to ask if he’d participate is the fact that he graduated with his Ph.D. from the University of Nottingham (UK), he has taught at the seminary level, he has written high-level academic works (see The Temporal Mechanics of the Fourth Gospel: A Theory of Hermeneutical Relativity in the Fourth Gospel and his forthcoming The Questions of Jesus in John: Logic, Rhetoric and Persuasive Discourse) as well as a popular level book discussing ecclesiology in the virtual world titled SimChurch: Being the Church in the Virtual World, and he is a pastor.

As the academic job market shrinks many doctoral students and graduates will need to ask themselves whether they (A) want to fight for one of the few teaching jobs, (B) create or find some alternative form of employment that allows them to use their skills outside the classroom (e.g., editorial work), (C) enter into the pastorate or some other service in the local church or one’s denomination, or (D) some combination of the above.

I hope this interview (two parts) will benefit students and teachers, academics and pastors, and all those who share a concern about the future of academia, academics, and education in the church!

Dr. Estes, can you tell me a bit about your current pastoral ministry?

I’m currently the Lead Pastor at Trinity Church, in Mesa, AZ, a suburb of Phoenix. Trinity is a fully multiethnic church, with Sunday services in both English and Spanish. Many would describe the church’s style as “contemporary,” more than “traditional”—I teach in jeans and play electric guitar (a Rickenbacker) with the band. Day to day, I manage a staff of about 12 people, plus additional paid workers. I’ve only been in this role for a few months, so we are currently working through our initial strategic planning which includes rebranding and revisioning.

When you began your doctoral studies at the University of Nottingham (UK) did you enter the program with the thought that you might do pastoral ministry or did you expect to work toward a professorship?

I entered my PhD program intending to mainly work in pastoral ministry. Or, perhaps more accurately, I hoped to do both, but my natural inclinations plus the job market made it pretty likely my ideal role was always going to be pastor as my first job and academic as my second job. I should also point out that I had several years of experience as a pastor prior to doing my PhD.

Do some people who do doctoral work “settle” for the pastoral vocation? What are some of the dangers of this attitude? Are you hopeful that these people can come to love the pastorate over time?

Yes, in my experience there are and will be a number of PhD-grads who every year, for various reasons but mainly the job market, end up settling for a pastoral vocation. Before I answer your good questions, let me say that my answers paint the situation with a broad brush: Each PhD-to-pastor situation is different, with different skills, personalities and gifts, and different pastoral contexts, so there is no way that this will cover everyone—I can only speak in generalities.

Still, I think there are many very, very serious dangers of the attitude that an academic should “settle” for the pastoral vocation. I will list my top seven.

#1 A PhD really needs to be called to the pastoral vocation.

In this context, I don’t care how a person defines the word ‘called.’ Being a pastor is not like flipping burgers (no offense to all the food-service folks out there!) Because of the demands placed on the average pastor, it needs to be a job that you want to do. Nobody wants to visit a doctor or dentist who is not excited about their profession—nobody wants to go to a church with a pastor who is disinterested in pastoring (or worse, just there for a paycheck). 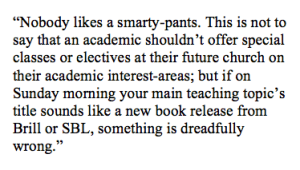 #2 A PhD needs to recognize that church is not a re-education camp.

Regardless of whether the church you are interested in pastoring is a “reach people” kind of church, or a “love people” kind of church, nobody needs a pastor whose primary goal is to re-educate their people because, for example, their people’s view of the diversity in the Judean religion during the Second Temple period is not up to snuff with the profs at Whatever University. Nobody likes a smarty-pants. This is not to say that an academic shouldn’t offer special classes or electives at their future church on their academic interest-areas; but if on Sunday morning your main teaching topic’s title sounds like a new book release from Brill or SBL, something is dreadfully wrong. Know why? Because in 99% of churches, people come in thinking about why their spouse is mad with them, how they are going to get their kids to behave, whether they have enough money to take vacation this year—and not whether the best word to describe Paul’s intertextual relations is an “echo.” If an academic wants to be a pastor, they need to care about their people, and caring about them starts with asking them what they need.

#3 A PhD needs to understand they can hurt people as a pastor.

In an academic setting, you can hurt people by being rude or aloof, giving them a bad grade, or teaching from a highly skewed perspective. But that relationship is transactional; students pay money and have certain expectations of how the relationship between professor and student will go. There are rules, and if it doesn’t go well, there are avenues for recourse. Being a pastor is quite different; people attend church for non-transactional reasons—to be loved, to feel hope, to find faith, to grow in knowledge of the Bible, and to engage themselves and others in areas of spiritual health. If a PhD-turned pastor (really, any disinterested pastor) doesn’t get this when people come to them for encouragement or growth, they can hurt those people. If a person comes in for counseling, they don’t need to know what the text says in the original language, they need some empathy (empathy then orig lang can work). People entrust their pastors with a lot of hope that their pastor will help them—which is why pastor-scandals are so hurtful to people. When you’re a pastor, you’re messing with people’s lives—their emotional, mental and spiritual health. A PhD has to take it seriously and not treat people as a case study, a widget or a curio.

#4 A PhD needs to understand being a pastor is hard work.

Every job is hard, but being a pastor is decidedly hard work. A pastor’s primary job is people: not administration, not study, not education. People jobs are always the hardest (imho). Many years ago I worked as a chemist in a lab with robots and almost no people—talk about peace and tranquility!—as robots don’t have expectations you can’t possibly meet or get angry when you fail to reach them. To pick a fight for a moment, I also believe, on average, being a pastor is much harder than being a professor. As a pastor, you have more people to manage, more bosses to deal with, more random expectations that pop up, more admin and more committees, plus that 2 AM call that so-and-so’s daughter has locked herself in the bathroom and is prepping to slit her wrists. It bears repeating, but if you’re an academic considering a pastoral career, make sure you talk to several ‘fully-engaged’ pastors to get an understanding of exactly what you will be doing in your new career.

4 thoughts on “The Pastor-Scholar: An Interview with Douglas Estes (Pt. 1 of 2)”