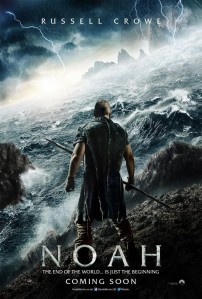 Finally, I saw Noah last Saturday. I don’t have any insights to add that haven’t been said elsewhere by others, but for those interested here are my brief thoughts [with potential *Spoilers* for those who have not seen it yet]:

– It was an enjoyable movie to watch and I’m glad I saw it in theaters. I don’t know that it would have been as good on a TV screen or laptop.

– It was a little strange to see so many blue-eyed Caucasians in one movie about the ancient world. Whereas I know Aronofsky isn’t trying to provide a historical depiction of the ancient world, but more of a midrash on ancient mythology, I can see why people would find the casting choices to be a little troubling, though I think the actors who were chosen did a good job. Has anyone read anything indicating why all the actors were all white?

– As someone interested in biblical studies and theology there was a lot to process. I am not bothered by the creative departure from the Book of Genesis. Many Jewish and Christian writings have done something similar. Last week I was reading 1 Enoch and wow, there is all sorts of creative and interesting interpretations of Genesis 6-9 in there.

– Aronofsky’s choice to include “the Watchers” was interesting as was his depiction of these angelic beings as those who tried to help the humans, but who were cursed by the Creator for interfering in a realm that was off-limits to them. The idea of having them trapped in rock to signify that they are tied to the earth was interesting, but it came across as a bit too “Transformers” at times.

– The Creator is probably the most interesting character in the film. God doesn’t talk. God acts. God sends messages via visions and dreams. Overall, God is complex and distant. I found God’s “relationship” with Tubal-cain to be one of the most troublesome yet intriguing parts of the story. Obviously, Tubal-cain is a bad man, but on several occasions he claims that the Creator has left humans to themselves so he and his followers have no other choice than to live for their own survival. When the rains begin to fall he begins to cry out to the Creator asking why the Creator doesn’t speak back and indeed, the Creator remains silent. For those who have ever felt this way about God for any stretch of their life this will be a very poignant motif in the story and it makes one ask themselves why God so often is silent.

– Noah’s obsession with saving creation and making sure there are no more humans after his children die was an interesting one. It made me think of those eco-ethicist who suggest that the worst thing in nature is humanity. We are the only animal that can destroy the whole thing and nature may be better off without us. Obviously, this stands in the face of most of the Jewish and Christian traditions where humans are the crowing work of creation, the image of the Creator, and the Creator’s mediator on earth.

– The final theological point made by As Il-La (Emma Watson) to Noah (Russell Crowe) that the Creator left it in Noah’s hands to determine if humanity was worth giving a second chance to was quite powerful. Immediately it made me think back to the scene where the last surviving humans outside the Ark where screaming as they climbed to the highest rocky point available to avoid the Deluge. Noah said there was no place for them because he thought the Creator’s mission for him was to see to humanity’s eventual extermination, but this proved to be either untrue or only partially true since God left the choice in Noah’s hands. It almost seemed to suggest that Noah could have mediated to God to open the doors of the Ark to some? Of course, this led me to think of stories like Abraham mediating for Sodom and Gomorrah, or Moses challenging God not to destroy Israel, or Jesus being depicted as the mediator between God and humanity. There is definitely a thread that runs through the Bible where a righteous person can stand before God and mediate on behalf of the people, or in Noah’s case, chose not to.

– I thought Methusela (Anthony Hopkins) was an interesting character. He was a wise man, visionary, and miracle worker with a sense of humor. His character helped relieve some of the film’s tension at various points.

Have you seen the movie? Any thoughts to share?

16 thoughts on “Some Belated Thoughts on Aronofsky’s Noah”